No Comments on Breathtaking Images Of Travel With Travel Lists For PackingPosted in Blogs, Travel By Andrew MuninPosted on July 23, 2021July 26, 2021Tagged travel

18 Images Of Travel For Your Travel Bucket lists

Below travel lists are the selected ones from famous Facebook Travel Group. Also check out the travel lists for packing at the bottom of this article.

There are only a handful of red beaches in the world. To achieve such a vibrant red, a beach needs to be near a rich source of iron and have a means for that iron to leach into the beach and be sheltered from harsh ocean waves. And that’s exactly the situation at Kaihalulu on Maui’s eastern shore.

Cenote Diving on the Yucatan Peninsula

It is rumored that many deep Cenotes have gold at the bottom, as the Mayans tossed in treasures to hide them from the invading Spanish conquistadors.

The Blue Domes of Oia – Santorini.

Another best travel lists – Santorini 🙂 Make this your in your Travel Bucket Lists. More Images Of Travel…

9/10 on the Afraid of Heights Fear Scale.
Ideas for 2021 🎉 The New Year’s Resolution Challenge

Rainbow road is located in this town’s liveliest area, surrounded by local shops and restaurants and leading to this famous Blue Church in Iceland

The view from the top of Havasupai Falls

The river runs through the house! You can take a tour of this incredible place designed by Frank Lloyd Wright.

Fallingwater is a house designed by the architect Frank Lloyd Wright in 1939 in southwest Pennsylvania’s Laurel Highlands, about 90 minutes from downtown Pittsburgh. The house was built partly over a waterfall on Bear Run in the Mill Run section of Stewart Township, Fayette County, Pennsylvania, located in the Laurel Highlands of the Allegheny Mountains. The house was designed as a weekend home for Liliane and Edgar J. Kaufmann, the owner of Kaufmann’s Department Store.

After its completion, Time called Fallingwater Wright’s “most beautiful job” and it is listed among Smithsonian’s “Life List of 28 Places to See Before You Die.”The house was designated a National Historic Landmark in 1966. In 1991, members of the American Institute of Architects named Fallingwater the “best all-time work of American architecture” and in 2007, it was ranked 29th on the list of America’s Favorite Architecture according to the AIA.

The house and seven other Wright constructions were inscribed as a World Heritage Site under the title “The 20th-Century Architecture of Frank Lloyd Wright” in July 2019.

Burning Man will be held in the Black Rock Desert, 120 miles north of Reno, Nevada. The towns of Empire and Gerlach serve as guardians of the desert region.

When its Summer in Italy and and you have Gelato

KNOWN AS ONE OF THE most unusual geologic wonders in the California Desert, the Trona Pinnacles were formed with calcium carbonate – spires of rock that rise from the bed of the Searles Dry Lake basin. Formed underwater between 10,000 and 100,000 years ago, some of these spires reach to more than 140 feet.

If going to Croatia you must check out Plitvice Lakes. Its a world heritage park of impossibly colored lakes criss-crossed by wooden boardwalks. Fed by 16 interconnecting lakes and scattered with autumn leaves, the view was like something out of a painting.
The color of the lakes changes from emerald to turquoise to navy and the difference in the elevation between lakes results in thousands of incredible cascading waterfalls.

Life is all about perspective, change the way you look at something and life may surprise you.

What National Parks have you been too?

Click below to view almost 80 Travel Lists For Packing. Don’t forget! This handy Packing List pad will help ensure you never leave for a trip without your essentials! 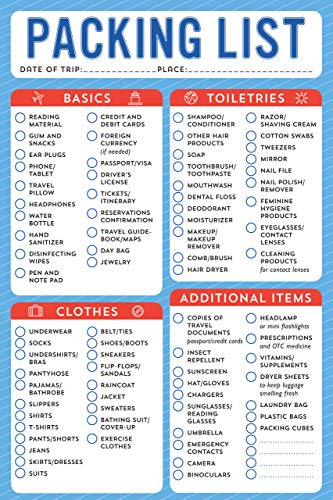 Well, nothing to conclude specific besides to mention the fact that travel is life, travel gives you unforgettable experience in life. So below is a bonus travel video to enjoy!

Breathtaking Images Of Travel With Travel Lists For Packing